Well here we are. 2018. Advancing to our graves with the advent of the new year; the old year gone and along with it all the missed opportunities and failed coulda/woulda/shouldas. I recently read a quote from some senior citizen fuck who stated something along the thought of ‘…I have more years behind me than I do ahead of me. Best to make the most of the years I have left…’

Oh fuck you, granny. Sorry. My new year’s resolution is to be even more curmudgeonly and annoyed with humanity. And I don’t have to try too hard; look at the state of the world we now inhabit. Let’s roll back environmental protections, kick damn foreigners out, and grab everyone by the pussy! BOOYAH! I’ll circle back on the P word. Hold tight. 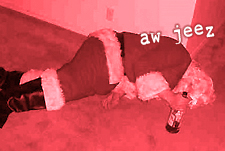 Christmas trim is about 90% packed away. I was feeling mighty accomplished until I realized that I have yet another box load of Xmas shit residing on the breakfast bar in my kitchen. It’s an easy oversight: “kitchen” is a wing I rarely visit. I just know that the room contains a metal box to make stuff hot and a bigger metal box to keep things cold. Sad, no? I used to throw down dinner parties for ten and not lose a beat; why, I’ve been known to paint the entire living room/dining room a fresh coat and entertain the same evening. But my desire to cook for one is limited nowadays; I haven’t really whipped up a dinner party in ten years. I’m rambling…

Oh. So Christmas was so so. I had zero expectations and those were met and exceeded. Mother sent a package in mid-December and followed up with a phone chat like this:

“…Did you get my package? Let me know when you get the package cuz’ I sent it priority mail. They said you should have my package by Wednesday. Now if you don’t get my package…well, you will probably get it but it was a shirt. So now you know…but anyway…that’s what should be coming Wednesday. If you don’t like it give it to someone who can use it…”

Oh the surprise and delights of the Christmas season are never ending. Such is the bounty of the unwilling and bitter. And the shirt did arrive; no tissue, no wrapping, no Christmas anything –just a shirt in a United States Post Office mailer pack. I suppose I sound like a bitch but I know damn well mother is at Dollar General 10 times a week and can surely grab a goddamn gift bag. Color me disappointed but what was I expecting?! GUCCI resort 2018?

I’m of the generation who still wears a sport coat to get on a plane; folks do question my penchant for an ‘airport outfit’ but it’s rather an easy explanation: if that jet falls from the sky I’m meeting Christ in a tailored jacket and possibly a tie. I do not need a $15 buck-an-hour crash site crisis crew to find me dead in sweatpants and no bronzer. No ma’am.

Over the holidays I made a radical porn discovery and it was quite by accident. I landed on ‘ruff fuck pussy boi’ movie clip, etcetera, as one does– and was literally shocked to a steel stiffie to learn that the “pussy boi” in the particular artistic endeavor did –in fact, have a pussy! I’m now all caught up on female to male trans men for future cocktail chatter and wank fests. Maybe this current penchant for vajay and furry chest combo is what OPRAH meant when I read that changing one’s narrative is always a good notion at the onset of a new year.

the daze of our lives